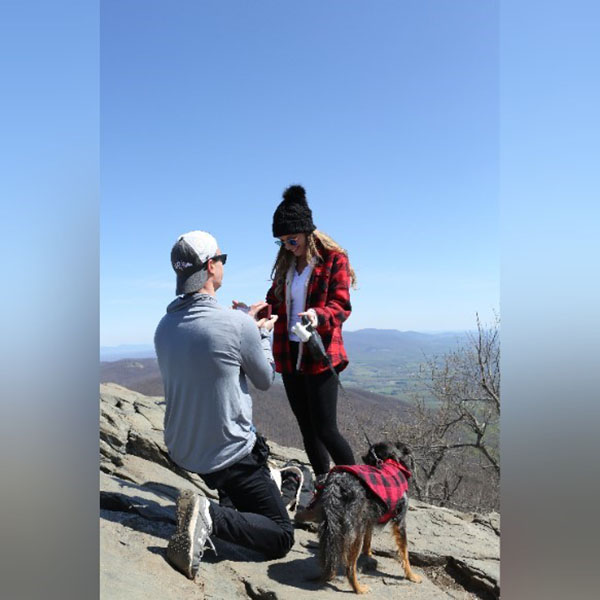 Climbing up to a rock outcropping towering above the Blue Ridge Parkway on Easter Sunday morning, we are in good company. Families are flocking to Humpback Rocks. Starry-eyed suitors are hiking up the trail with women they love, and want to marry.

Sasha and Erin have three friends making the climb ahead of them. One carries a Trader Joe’s bag packed with a bouquet of burgundy Mums, and a bottle of champagne. At the breathtaking summit, looking out over Waynesboro, Staunton, and the verdant valleys of Nelson County, they try to look casual, assessing the proposal possibilities.

“Maybe they’re going to do it over here,” the man carrying the mums says, trying to think like a groom.
When they tell us they are preparing for Eric’s mountaintop proposal to Sasha, it hit us. More than one hopeful groom is going go down on one knee on this rock today.

All around us are families taking in the view together, showing single people the love of parents for their children, and one another, this bright blue Easter day. Greying Moms and Dads carry metal hiking sticks, with cork handles, helping them keep up with the young people they sired. Tribes began tribes, judging by the colors and logos on their caps and t-shirts. Unsurprising, on the tallest peak this side of Charlottesville, Hoos predominate. Yet even the people sporting Orange Vs and Rotunda insignia are divided into the School of Engineering, the Darden School of Business and other special places on Grounds where Hoos Children can assert their individuality.

An Hispanic family wearing Vs from both Universities gathers round the rock for a picture, smiling when their father says, “Say cheese.”

A young couple in hiking gear emerge from the throng, walking to the top of the rock. The young woman and her little dog wear red plaid. That vibrant pattern is a secret signal to a pair of photographers.

Though we’ve never met Christian, Jamie and Paco, we are hoping to witness and capture moment that could bring them all together forever.

Wasting no time, Christian gets down on one knee, pulls a box out of his pocket, opens the lid to reveal a treasure, looks up at Jamie and asks, “Will you marry me?”

Her stunned look of pure joy is all the answer Christian needs to stand and take her in his arms.

“Yes,” she finally manages to say.

The ring on her finger gleams as she picks up little Paco and holds him close with her husband to be.
“Your parents are getting married!” she tells that little dog. He looks at her solemnly, believing that family promise.

A couple exulting at the top of the world really beams when cheers erupt from another side of the rock. A champagne cork pops. Sounds like Sasha said yes. One newly engaged couple applauds another as their photographers snap away, capturing images to grace the walls of a house in Baltimore about to become a home.

On Easter Sunday in Virginia, a pair of photographers can see forever from Humpback Rocks.
Ran and Linda Henry of Blue Mountain Weddings, represented by 20 South productions, renew their vows when they photograph yours.